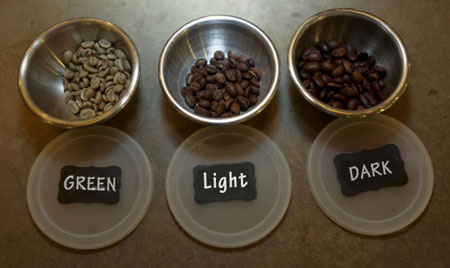 The unroasted beans are green and can be roasted light or dark.

Just beyond the concrete horseshoe that is Little Green Hive Coffee and Smoothie Bar, owner Amy Tuggle sets her sweetgrass basket on the table and begins to explain.

“These are unroasted,” she says, shaking a mix of yellowish-greenish peanut-looking pebbles. She points to another pile of coffee beans, these tanner and drier.
She pushes over a third grouping, with dark, shiny pellets. “See the oil?” she asks.
Then, Tuggle lines up three tiny black cups on a porcelain plate, each filled with a coffee — specially harvested, carefully hand-roasted, expertly brewed — corresponding to the beans she has just showed me.
I take three sips and am amazed by how little the samples favor one another. Not just weaker and stronger. Not just lighter and bolder. Each of them distinct and complex and flavorful. Each of them as disparate as a range of reds in wine. 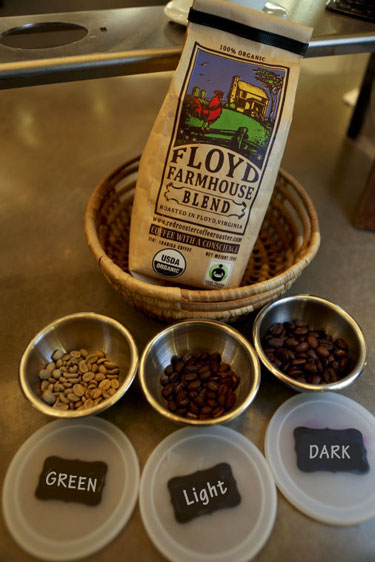 “Tasting the difference is really a big part of understanding,” Tuggle explains.
What she wants us to understand is that Little Green Hive, located inside 16 W. Marketplace on Church Avenue, is not so much in the business of caffeinating Roanokers as it is in expanding the population’s idea of what coffee even is.
Tuggle is not alone in her quest to train palates while she brews java. Since April 2013, when Little Green Hive got its start, at least five “third-wave” coffee houses have opened in Southwest Virginia: Land of a Thousand Hills in Daleville, South Roanoke’s Sweet Donkey, Christiansburg’s Idego Coffee. This past summer, Froth Cafe changed owners and now Michael Carroll, who once was a taster for Starbucks, enthusiastically promotes microroasters like Red Rooster Coffee Roaster, Lexington Coffee Roasters, Mattie’s Mountain Mud and Raleigh Coffee Company at his Roanoke County shop.
Read more: New coffee shop coming to South Roanoke (Jan 27)
“Coffee, to me, is more wine-like now,” says Carroll. “I’m hoping to open [Roanoke] up to a vast landscape in what’s happening in coffee … I think it’s catching on here.”
Riding the wave
So what exactly is third-wave coffee?
Coffee’s first wave was instant grounds from a can bought at the grocery store, scooped and mixed with water. Its second wave was the arrival of Starbucks and Peet’s, businesses offering higher quality coffee and greater variety, with espressos and lattes and iced coffee mixes, but on a large scale. In the third wave, coffee moves from commodity to craft. Beans are sourced from particular farms (certified as fair-trade or organic), roasted with honed skill and served using small-batch methods.
In bigger cities, third-wave coffee shops often offer coffee sourced from a single farm’s seasonal harvest. Once the harvest is gone, that coffee is no longer available. Beans and blends change by the seasons. A cup of joe can sometimes retail for upwards of $8, and an automatic drip machine can’t be found on the premises.
In Roanoke, where shops have to cater to a more general audience, third-wave lines are less distinct. Little Green Hive brews micro-batches of coffee — roughly six cups at a time — to balance freshness with convenience for customers. Idego Coffee hand-crafts each cup, offering four different preparation methods: Chemex, which uses a beaker-type vessel to steep the coffee; two different pour-over methods; and French press. Froth and Land of a Thousand Hills serve automatic drip as well as Chemex, French press and pour-overs. Sweet Donkey mainly offers drip coffee, but from a top-notch, highly programmable machine. 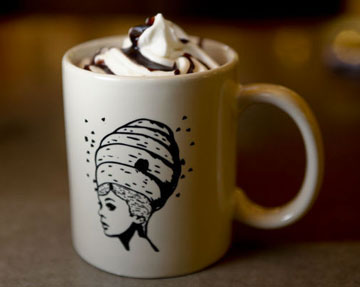 A hot chocolate from unsweetened cocoa with whipped cream at the Little Green Hive Coffee and Smoothie Bar.

“It’s really kind of the best of the best drip coffee,” says co-owner Dustin Eshelman.
The movement to craft coffee is similar to the movement to craft beer or hard cider. All of them get a boost from the growth of the local food movement and the improvement of the American palate.
“It’s happening here in the New River Valley,” says Idego’s owner Paul De Arras. “You see the interest in Virginia wine, drinkers moving toward craft beer, people are ready to understand that there’s a better flavor in coffee, too.”
The changing coffee scene
The Roanoke area has boasted its own coffee roasters for decades, including Mill Mountain Coffee in Roanoke and Salem, Mattie’s Mountain Mud in New Castle, and Lexington Roasting Company.
In recent years, a new batch of local roasters has emerged: Red Rooster Coffee Roasters in Floyd, Strange Coffee Company in Riner, and Roanoke’s Christopher Spoon, who roasts all of CUPS Coffee & Tea’s beans.
But even more recent is the opening of those third-wave coffee shops, where owners and baristas have elevated coffee to the realm of art. What sets them apart is their different brewing methods, vigilant upkeep of equipment and attention to all the ingredients. At Little Green Hive, for example, no chemical sweeteners are offered and the milk foamed for lattes is local.
Tuggle’s husband and partner, Mark Garland, explains it this way: You can have a farmer who painstakingly grew and harvested his crop, a buyer who ensures the beans are fresh, and a talented roaster who highlights the beans’ unique flavors.
“And then I could mess up your espresso,” Garland says with a laugh. There a million ways: The barista’s timing could be off. The water filter could be clogged. Residual grounds could mar the taste. 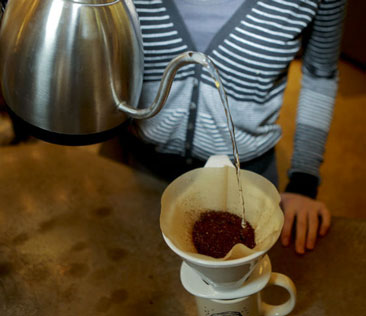 “It takes a lot of care from a lot of different hands to make a good product,” Garland says.
Education is key
The other component these shops have in common is education — starting with their own.
De Arras said he spent two years tasting the best coffee he could find in Denver before moving to Christiansburg and deciding to brew Denver-based Corvus Coffee in his shop.
Sweet Donkey’s Eshelman and co-owner Ann-Maree White chose to source their coffee from Counter Culture of Durham, North Carolina. One of the reasons they picked Counter Culture was because of the training the company offered them and their baristas.
Little Green Hive brews only Red Rooster roasts. Tuggle, Garland and their baristas have all traveled to Floyd to see the roasting, to work with roasters to develop their own blend, Get Buzzed, and to taste.
Land of a Thousand Hills in Daleville is a franchise of an Atlanta-area company that sources its coffee from Rwanda as a way to help that country heal from the 1994 genocide. The coffee company roasts its own beans and trains all franchise employees.
But the education doesn’t end there. Most area coffee drinkers have been raised on a dark-roasted, maybe even burned-tasting cup of coffee. They’re accustomed to mixing in cream and sugar, or they’re familiar with a Starbucks-type customizable coffee drink.
“Our coffee tastes different,” Eshelman says. “Since our coffee is so lightly roasted … bringing out the natural fruit flavors of coffee … it can be off-putting. If you’re not ready for that, you might think it tastes sour.”
So these coffee shops educate their customers, too. They answer questions, offer impromptu tastings like the one I had at Little Green Hive, and stage formal training events.
Sweet Donkey and Froth have each brought in their roasters to talk with customers and pour samples in a setup similar to a wine tasting. Idego has organized competitions among local coffee shops to highlight certain aspects of the craft of coffeemaking.
Also at Idego, every Friday night is tasting night. On a typical Friday, De Arras will choose one single-origin coffee and brew it five different ways. 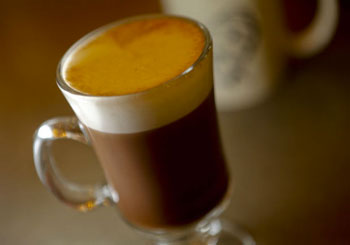 A mocha latte with fresh foamed local milk is made with espresso and unsweetened cocoa.

“It’s really fun to watch their eyes light up,” De Arras says of the tasters. “Most people think coffee is coffee. But here are beans from a single estate, maybe, and I’m making you very different cups of coffee.”
The main message these coffeehouses would like to get across is simple: High-quality coffee, prepared properly, tastes good. It doesn’t need any additions. “You don’t have to have that wince in your palate to get caffeine,” Tuggle says. “It can be enjoyable.”
So the next time you consider reaching for the same old coffee, consider stopping by one of these grounds-breaking shops. You might discover a world of coffee you never even knew existed.
“It’s like the difference between store-bought lasagna or homemade lasagna” Garland says of first- or second-wave versus third-wave coffee. “It’s just not the same thing.”